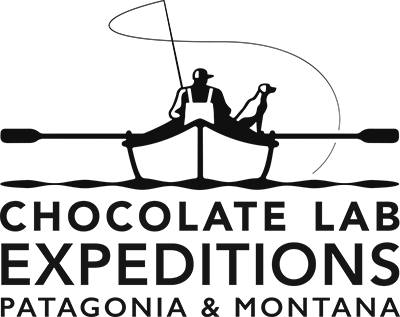 Ron grew up in Portland, OR fishing the rivers of Central Oregon with his grandfather and father.  When he was 5 years old he caught his first fish on a fly in the Metolius River and hasn't stopped fishing since.  He started tying flies and working in the industry at 16, at Kaufmann's Streamborn under Randall's tutelage and went on to work summers at a fly shop on the Metolius before heading off to Wash U in St Louis for college.  Ron started guiding in '91 on the Madison and then in '92 guided for Mike Lawson on the Henry's Fork, where he remained through 2002.    It was during this time that Ron had an offer to guide in Patagonia and in '96 spent his first winter in Argentina.

Ron is a patient guide who transmits his passion for flyfishing to his clients everyday on the water- from beginners to experienced anglers alike.

Ron and CLE were featured in the movie "Rise" by Confluence Films (www.confluencefilms.tv), and multiple times in the Angling Report, including a feature article in the October 2012 issue.  Ron was twice covered by Columbia Country's "Fishing The West", and Flyfishing and Tying Journal's Spring 2011 Guide Profile, various articles in Trout & Salmon, Gamefisher, Flyfishing & Tying, and others.  He is on the Pro-Staff of Scott Rods & RO Drift Boats, and in 2004 with much help from Vanessa, they started the Argentina branch of RO Drift Boats, bringing locally made drift boats to Patagonia.      Ron and Vanessa live half the year in San Martin de los Andes, and the other half in Ennis, MT.  They have 2 children Benito (8) and Olivia (5)

Head Guide Diego Gaiser is one of the hardest working guides in the industry, patient and enthusiastic, with a passion for chasing big Patagonia trout.  He's a great companion on and off the water.  Diego grew up in the northern part of our province, fishing and camping all over Neuquén with his parents who were rural school teachers and administrators.

Diego moved to San Martin de los Andes in 1990 and immediately started pursuing his Tourism Guide license focussing on becoming a Ski Instructor.  From 1994 through 2000, Diego worked double seasons as a Ski Instructor in San Martin and Andorra, Spain, and he is now recognized as a Level III National Ski Instructor.

In 2001 Diego stayed in San Martin for the summer and began his fishing career.  Ron and Diego were introduced by their ladies and immediately started fishing together.  After a couple of seasons running the camp boat on the overnight float trips, Diego started guiding for CLE.  Diego's hard work, dependability, and fun loving nature has played a major role over the years in defining CLE's reputation as an outfitter.  Diego was featured with Ron in Confluence Film's movie "Rise", is on the Pro-Staff of RO Drift Boats, and the sales rep for RO Drift Boats Arg.

Diego is married to Silvina and they have 2 children together, Guadalupe (Ron's goddaughter) and Benjamin (Vanessa's godson).

Shaggy is one of the most knowledgable and easy going guides you'd have the pleasure of spending a day with.  Shaggy grew up in San Martin de los Andes, then after high school Shaggy went on to study Biology at the Universidad Nacional de Cordoba.  There he studied aquatic biology specializing in fisheries and environmental impact.  He followed his studies to the US and then onto Japan, which earned him a position working on the Neuquen Provincial Center for Applied Ecology (CEAN) which guides and informs policy regulating the areas fisheries.  Authoring and co-authoring various publications and technical studies, he knows as much about the local rivers and lakes as anyone.

Ron met Shaggy his first year in Argentina, they became quick friends, and fished together all over the area-from the Caleufu to the Malleo.  It was many years ago when Shaggy invited Ron to the lower Limay to help CEAN collect data, that Ron first saw this incredible fishery.  Shaggy was the keystone to understanding the complex fishery of the lower Limay.  If you enjoy knowing all the flora and fauna of Patagonia, this is your guide.

Shaggy and his wife María Eugenia (Mariu) have 3 children, the twins Ivan & Nicolás, and their daughter Sara.

Nico was born and grew up fishing in the San Martin area.  He started guiding in 2008 and quickly evolved into a very skilled fishing guide.  With an easy personality, great professionalism, and a good tactical aproach, Nico consistantly gets the job done while you have a blast fishing Patagonia.  Three straight years guiding the Chimehuin allowed Nico to hone his rowing skills before coming to guide for CLE.

Vanessa was born and grew up in San Martin de los Andes, third generation in a family whose history in the town goes back to 1940.  She studied Graphic Design in Mar del Plata, worked for a year in the provincial capitol of Neuquen, and then returned to San Martin and opened up her own graphic design firm.  Shortly after, she and Ron met and after a couple of years were married in 1999.  Innitially, Vanessa designed logos and fishing brochures, and then suddenly found herself running an outfitting business.

Vanessa's long family history helped CLE access many of the lesser known properties and rivers in the area.  Some of the great folks that work for CLE are childhood friends and school mates.

Vanessa manages the head office and base of opperations for CLE- insuring logistics come off flawlessly, coordinates all reservations & non-fishing activities in and around San Martin, manages the accounting, and oversees all food preperation for the town based float trips and overnight camps.          Vanessa and Ron have 2 children- Benito and Olivia.

Ruben was born in San Martin de los Andes and grew up with, and is an old friend of Shaggy's.  Rubens' parents ran a restaurant in San Martin for many years, teaching Ruben many of the great recipies he brings to our camps.  He works hard, is incredibly efficiant, and is quick to fill an emptied wine glass.  Ruben handles all of our overnight camp trips and does the cooking at the Collon Cura River Camp.  Ruben has been flyfishing since his late teens and is also a licensed fishing guide within our province.